"I'm personally pro-life, but I don't want to impose my beliefs on others." You've probably heard this statement before. But is abortion - the taking of an innocent life - really a "personal freedom" issue? In this video, Live Action founder and president Lila Rose breaks down the logical fallacies of being "personally pro-life" - and how to convince others to take up the cause for our most defenseless children.

Have you ever heard, “I’m pro-life but I don’t want to IMPOSE my beliefs on others… “ Or, “I am personally opposed to abortion, but I can’t take away someone else’s choice to have one”?

The reality is, if we acknowledge that abortion takes the life of a human being, then we should be opposed to all abortions. Every innocent human being has a right to not be killed, and that’s why we can’t just be “personally pro-life.”

The right to life is the number one right that "We the People" under the Constitution of the United States have promised to protect, along with liberty and the pursuit of happiness. If our laws do not protect the right to life, then they are failing their most basic function. So it is actually impossible to be just "personally pro life." You either believe in the right to life for all human beings, or you do not.

Some of those who call themselves “personally pro-life” are under the impression that opposition to abortion, “takes away the rights of others.” But this is completely upside down. No one should think they have the right to kill an innocent human being, especially if that human being is their own child. To oppose abortion is to PROTECT children from having their most fundamental rights taken away.

Those who are "personally pro life,” in an effort to be fair towards other people's views,” actually put forth a view that is very unfair. Under this view, their own preborn children have human life and human rights, but other people's children may not.

If a person is going to be "personally pro life" and grant their own preborn children the right to life, then shouldn’t they grant that right to every other preborn child? A person would never say that they only “personally oppose child abuse.” They would never say, “Well, I would never abuse a child myself, but I can’t take away a parent’s right to abuse their own kids.” That wouldn’t make any sense. But if the preborn are human beings, then abortion is the ultimate form of child abuse.

Since Roe v Wade, over 60 million children have been killed by abortion. Let that sink in. 60 million human lives, and these lives continue to be killed every day. In our country. In our states. In our cities. For many of us, it happens down the street. This is the greatest civil rights crisis of our time and we can’t just sit on the sidelines. This is why I have dedicated my life to ending abortion and building a culture of life. All of us need to do everything we can to protect innocent life, from educating one another on the reality of life in the womb, to exposing the horror of the abortion industry, to giving charitably to support new mothers and fathers, to ministering outside of abortion mills, to opening our homes to children that need foster care or adoption. And vote: vote with your ballots, vote with your dollars, make the pro-life position heard with your posts on social media. Together we can create a community where abortion is rejected and every human life is loved and cherished.

Even if we could be "personally pro-life," would it matter?

10 abortion myths that need to be debunked 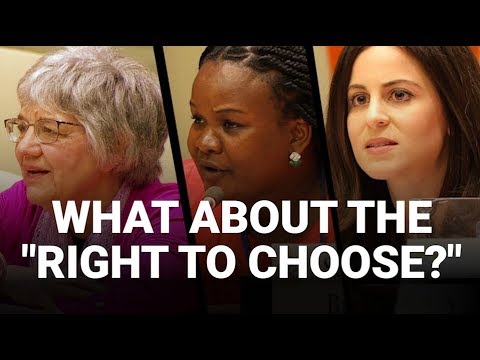 What about the "Right to Choose?" - Women at the UN fire back